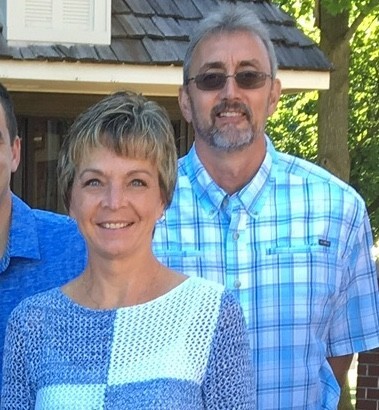 I was born at Wabash Hospital, and I am a lifelong resident of Miami County. I grew up on a small farm. I was the oldest of three children to Rex & Juanita Mays, and I have two brothers — Curt in Kingston, Washington, and Doug in Wabash, Indiana — which makes me the favorite daughter and favorite sister!

I am a graduate of Maconaquah High School, and I was a ten-year 4-H member. I earned my associates degree with honors in Secretarial Science from Tri-State University. When my parents took me to college, there were several guys from the local fraternities helping freshmen move in on that very busy, crowded day. Several months later the guy who helped me move in reintroduced himself as Greg Minard. We went out on a couple dates before the end of the school year, talked over the summer break, and started dating when the next school year began. Two years later we married and have been happily married for 34 years.

We have two sons. The oldest, Dustin, graduated from Tri-State University with an engineering degree. He is married to Katie and they live in Angola. In the last 1½ years they have blessed us with six grandchildren! They are foster parents and have adopted five children, ages 3 – 16½ years old, and in May they had a son! So we have kind of done the grandparent thing backwards with ages! But we are loving every minute. Our youngest son, Corey, lives in Indianapolis. He was the 2011 Miami County Lilly Endowment Scholar. He graduated from Butler University with a double major in Risk Management and Finance. We are fortunate both boys had accepted job offers when they received their diplomas!

I was the recipient of the Miami County Community Character Pillar Award in 2014. 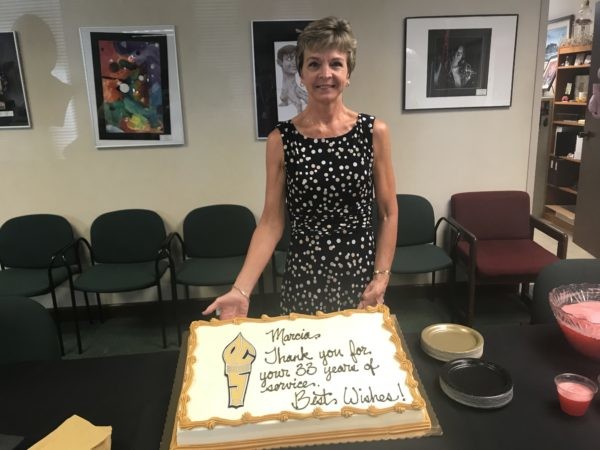 2. What are your hobbies and interests?

I enjoy walking for exercise and have been seen around Peru by many people. My husband won’t walk with me because I walk too fast and he can’t keep up. My boys have even joked they learned to run so they could keep up with me. And that was beneficial for them as they were both soccer players at a young age through our local YMCA program and continued playing into their college years. My husband and I enjoyed watching them play and spent many weekends traveling throughout Indiana to soccer games. Before we had the boys and I had time for hobbies, I enjoyed basket weaving and crossing stitching. Once the boys got active and time started moving faster (like our parents told us it would), I started scrapbooking. I also enjoy baking and do that many times for birthday and Christmas gifts. I also enjoy reading, being outdoors, and of course time with my family. We also enjoyed primitive camping and boating and still get together at least once a year for a family camping weekend, although we have introduced a little bit of electricity into our camping now! I am very fortunate that my mom, brothers and their families, along with my family, have been able to enjoy extended family vacations together. Over the past 11 years we have been to Hawaii twice, taken an Alaskan cruise, and just returned home from a two-week vacation on the Outer Banks of North Carolina. And we are all still talking to each other!

3. What is your job title and/or what organizations are you involved with in the community?

My official job title now is Nama! I retired July 11 (my dad’s birthday) after 33 years as the Administrative Assistant / Superintendent’s Secretary at Peru Community Schools. For now I am going to enjoy retirement and not waking up to an alarm clock! I started working when I was in high school. After I graduated I worked at Mississinewa Reservoir for three summers and had a job while in college. My dream job was to work in a law office. I was fortunate to begin that career a month after I got married. Within a year the secretary position at the Superintendent’s office was available. I was happy where I was but intrigued with the opportunities that position offered. I applied, interviewed, and accepted the position with the blessings of the attorney I worked for as he was the school attorney and we were able to continue to work together for several more years. 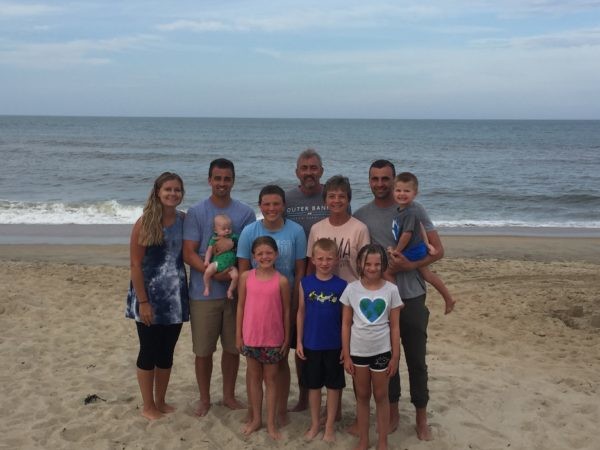 Ask and ye shall receive. This community supports the needs of their fellow community members. We are a community that cares and has many dedicated people. My dad was awarded the Miami County Community Character Pillar Award in 2009 because he exemplified and embraced honesty, forgiveness, loyalty, courage, respect, and responsibility and practiced these characteristics every day. Of course I think he was a great guy, but he was an ordinary person who put his best foot forward and led by example. Our community may not have numerous high paying jobs, people with fancy titles, or big industry, but we are a community that supports. We have a community blessed with heritage. We have very good educational systems with teachers and support staff to help our youth reach and believe they can attain their dreams.

5. How did you become involved with the Community Foundation?

As the secretary of the school corporation, I received phone calls from family members wanting to set up scholarships or memorials for their parents who were former teachers and had passed away. I became familiar with the Community Foundation and put the families in contact with MCCF. Unfortunately in September of 2008 my father passed away unexpectedly in a farming accident. He was very active in the community and well known and I knew there would be an overwhelming number of people who would pay their respects. I’m a practical person and didn’t want the money that would be spent on flowers and gifts to be a waste when I knew there was a better way to remember my father. Early the next morning, which happened to be a Saturday, and with the help of my dad’s dear friend Max Hattery who was a MCCF Board member, we contacted the NICF Director to see what could be done on short notice. Terri was almost immediately at my parent’s home sharing the options. We set up a Field of Interest Fund in Dad’s name, Rex E. Mays Memorial Fund, that would support the youth of the community and develop positive sportsmanship as Dad was a huge sports fan and believed in the youth and their abilities more than their win/loss record. We were overwhelmed with the response and generous financial support from family, friends, colleagues, and the community. Of course through that experience I learned the Community Foundation was more than just scholarships. Shortly after I was asked if I would serve as a community member on the grants committee. That was an easy decision as we met and gave away money! Little did I know they were drawing me in and shortly thereafter I was asked to be a board member.

6. What do you like about the Community Foundation? What role do you think it plays in the community?

MCCF was a vision of just a few people who believed in this community. That vision is now 25 years strong as we celebrate our 25th anniversary! We are here for the citizens and the community because they believe. We believe! MCCF serves not only our youth with numerous scholarship opportunities, but we serve the community through supporting projects, ideas, and a vision of the future.