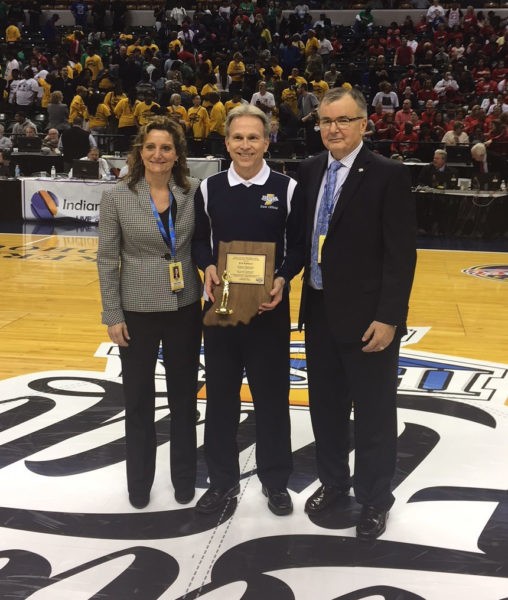 IHSAA Assistant Commissioners Sandra Walters (left) and Phil Gardener (right) presented the Boys Basketball Official of the Year award to Kirk in March 2017 at Banker Life Fieldhouse, where he officiated the boys’ basketball state finals. Kirk then retired from officiating.

Kirk grew up on a small farm outside of Atwood, Indiana. He went to Mentone Elementary, Talma Junior High, and he graduated from Tippecanoe Valley High School in 1977.

He then began a busy and exciting college career! He graduated high school on a Saturday and started college at IUSB the next Monday, where he completed 2 years of college in just 12 months, without any breaks. He took summer classes and heavy class loads each semester. He started mortuary school 1 week after his last class at IUSB, where he once again took 2 years of classes in 12 months. He graduated mortuary school on a Sunday and got married to his high school sweetheart, Kim, the next Saturday!

He and Kim have been together for 39 years. They have a daughter, Kara, and a son, Kyle, who was the 2001 Fulton County Lilly Endowment Community Scholar. Kyle and his wife, Megan, have a son named Truman.

Kirk has many hobbies, including woodworking, making apple cider in the fall, running, and bicycling. He participates in 12 or more triathlons, half marathons, and 5ks each year! He owns 21 bicycles, mostly Schwinn Stingrays from the late 60s and early 70s. He’s also a closet numismatist. Additionally, Kirk recently retired after 35 years of officiating high school volleyball and basketball. He officiated 16 state championship games.

A unique fact about Kirk is that he owns what most of the cereal experts say is the world’s largest private collection of prizes found free in cereal. He has more than 1,300 prizes that he started collecting in 1973. What makes his collection unique is that they are all unopened, tagged, and cataloged. He has them stored in totes per year and decade. He is a big cereal eater, and he has eaten 95% of the cereal himself! It’s not unusual for his pantry to have 20 or more boxes of cereal in stock. 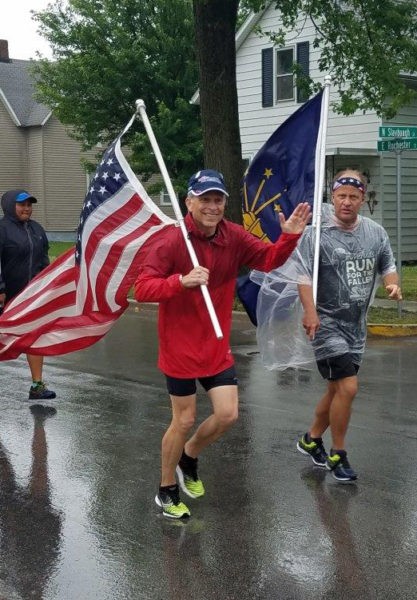 Kirk participating in Run for the Fallen, during which he ran 37 miles in two days. He was honored to be able to carry the flag into town.

When asked about why Kirk loves his community, he said he loves “that we have been strong enough to survive. When our leadership in town sees a problem or opportunity, they care enough to unite and make a difference. Our public servants are top notch. I can safely walk or run or bike anywhere in Akron without a worry. I’m tremendously proud of our park system, which is second to none. We are represented with outstanding medical services and locally owned and operated eateries. We have a high tech elementary. I have many things to like and appreciate about Akron.”

Kirk first became involved with the Fulton County Community Foundation when a representative from Akron was needed. We are so glad he did!

Kirk shared with us that he likes the fact that the Foundation has adjusted to the times internally and externally on granting local needs. “It is not a stagnant group,” he said. He has found it very entertaining to watch new ideas develop on how to give away money!

“The Foundation continues to have a growing role in all the communities, even after 2 ½ decades,” Kirk said. “Opportunities grew when the Foundation was able to become sustainable, allowing for an additional level of involvement, and the Foundation has not looked back!”