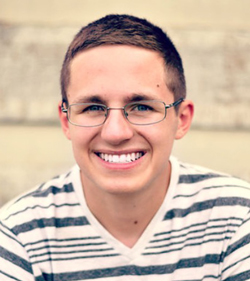 Joshua will receive a four-year, full-tuition scholarship to an Indiana college or university of his choice and a $900 yearly stipend for required books and equipment.

Joshua is the son of Glen and Kari Catanzaro and plans to attend Indiana University Bloomington. There he will study Music, specifically Piano Performance or Music Education.

Joshua is a member of Marching Band, Concert Band, and Pep Band. He has won several awards and has taken leadership roles in these activities. He also participates in National Honor Society, Fellowship of Christian Athletes, Academic Superbowl, and Spanish Club. He has done much volunteer work in his community, including playing piano at local nursing homes.

Joshua was selected for the prestigious Lilly Endowment Community Scholarship from a field of twenty-six applicants by the Miami County Community Foundation Scholarship Committee.

This is the second year in which applications were due in September, whereas in previous years they were due during the spring semester. This change was made in an effort to identify Lilly Scholars earlier in the school year so that recipients have more time to decide which college or university to attend.

During the selection process, the applications are ‘blinded,’ meaning that the identities of the applicants are removed. The Committee scores applicants on academic performance, volunteer and paid work, school activities and honors, as well as essays. Of the twenty-six applicants, six finalists were selected for a final review. These finalists were asked to write an essay, make a presentation, and have a personal interview with the Scholarship Committee. The Committee narrowed the field to one nominee as their recommendation. Finalists’ applications are submitted to Independent Colleges of Indiana, Inc. (ICI) for the final selection of the recipient.

ICI is a nonprofit corporation that represents thirty-one regionally accredited degree granting, nonprofit, private colleges and universities in the state.

The scholarships are the result of a statewide Lilly Endowment initiative to help Hoosier students reach higher levels of education. Indiana ranks among the lowest states in the percentage of residents over the age of 25 with a bachelor’s degree.