Preserving the memory of the former NJ-SP High School 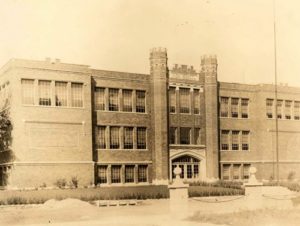 Through the generosity of First Farmer’s Bank and Trust, the NJ-SP HS Memorial Committee and the Town of North Judson have acquired a portion of property on the site of the historic school that will be used as the site of the monument. After much thought and discussion, in addition to input from a professional landscape designer, the group has created a design that mimics the front entrance of the original school building. 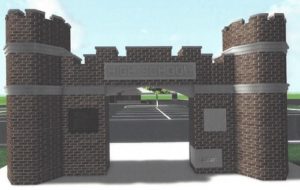 During construction, some original bricks will be used in addition to the new bricks for the project which were generously donated by Norwayne Lumber. The cost of this project is estimated to be approximately $25,000-$30,000. The Committee recently received a grant of $2,000 for the project from the Community Foundation.

The committee and members of the North Judson-San Pierre High School Memorial Fund hope that graduates will take time to review the plan and consider helping to make the proposed monument a reality. This monument will serve as a reminder that the historic NJ-SP High School will forever be in the hearts of its students. If you have questions about the project, please contact Committee Chair Marshall Field at 765-490-0772.

You can help preserve the memory of the former NJ-SP High School by clicking Donate and indicating that you’d like your gift to support the North Judson-San Pierre High School Memorial Committee Fund.