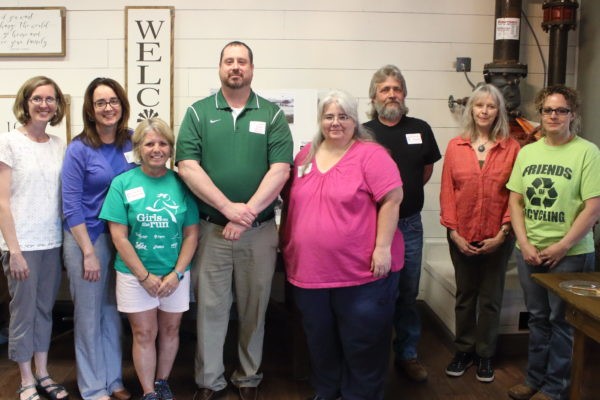 The event was held at the Jarrety’s Arlington Room in Rochester on Thursday, May 10, and a total of $6,500 was awarded. Members of the Giving Circle vote for their favorite programs and initiatives to receive these funds from dues and a growing endowment fund.

The grant committee of the Giving Circle reviewed all submissions and selected Champions Together, Girls on the Run, Friends of Recycling, and the Fulton County Historical Society to go before the entire group for the final decision. All finalists receive grant dollars.

Each finalist made a short presentation, and Giving Circle members cast votes for their favorite project. The amount of votes each organization received determined the amount of their grant.

Girls on the Run received the first place award of $2,500. Girls on the Run inspires girls in third through fifth grades to be joyful, healthy, and confident. Trained volunteer coaches lead small teams through the research-based curriculum, which includes dynamic discussions, activities, and running games. Additionally, the girls participate in a community service project. They end the ten-week program with a celebratory 5K event. This grant will help to cover program costs so that no girl is turned away from the program due to financial need.

Friends of Recycling and Champions Together each received a $1,000 grant. The mission of Friends of Recycling is to educate the community about recycling and to encourage recycling throughout Fulton County. They support the Fulton County Solid Waste District by participating in community outreach projects which promote recycling. The group began in August of 2017. Their grant will help cover materials needed for their activities in schools and in the community.

Champions Together is a collaborative partnership between the Indiana High School Athletic Association and Special Olympics Indiana that promotes servant leadership among student athletes while changing their lives as well as the lives of those with intellectual disabilities. Their grant money will help them to stay a “Banner School” through the Special Olympics. Specifically, it will help them to have a Unified Track team, a Unified Flag-football team, and to bring together general education and special needs students while initiating an “R” word campaign to eliminate negative language from schools.

Entertainment for the night was provided by Carol Morris. She entertained with a selection of Americana and folk songs.

The Giving Circle fulfills its mission through annual dues of $120 to the Fulton County Community Foundation. Half of the dues are distributed each year through grants. The remainder are put into a growing endowment fund for current and future grant cycles. The Giving Circle has granted $44,500 since it was formed in 2010. The group’s endowment fund has grown to $45,991.94.