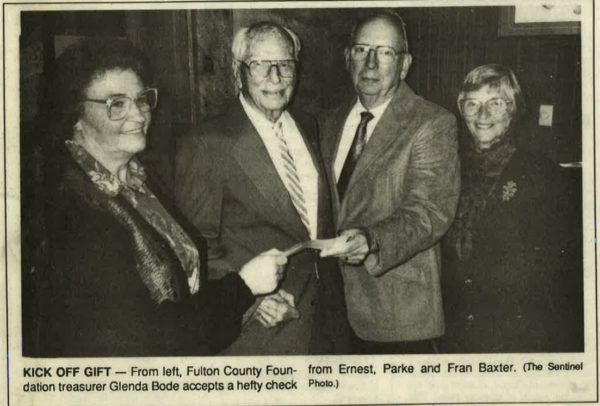 If someone were to tell you that you could start something amazing for your community, but there’s just one catch—you have to raise a million dollars in three years—would you do it? Would you be willing to set aside the time that this feat would entail? Would you have faith that your fellow community members would contribute that amount in just three years?

That would be a tough challenge, but it’s one that the founders of the Fulton County Community Foundation accepted. Fears, worries, and anxieties pushed aside, they jumped in head-first with their eyes looking forward to the end result and with the belief that this could work. That they could establish an organization which would support their community forever. And we’re so glad they did.

“I remember the first time that I attended a meeting when the idea of the Community Foundation was being presented,” said Glenda Bode, who was involved with the Foundation from the beginning, “and I thought ‘what a wonderful positive thing that would be.’”

Glenda was one of the very first board members of the Community Foundation. Early founders and board members were so dedicated. They contributed their time and effort, and they also gave financially. They were determined to make a lasting impact on Fulton County.

The FCCF was offcially established in 1993 as a fund affliate of the Northern Indiana Community Foundation (NICF). The FCCF alone raised more than its $1 million goal in its first three years, and it also received an additional $500,000 in match money from the Lilly Endowment.

The first fund established with the FCCF was the Baxter, Inc. Fund. Ernest, Parke, and Fran Baxter, who owned and operated Baxter Drug Store (now Webb’s Pharmacy), gave $10,000 to the FCCF to put in the new endowment fund that would support charitable nonprofits and projects in the community forever. Parke was also one of the FCCF’s very first board members.

The FCCF was able to award its first grants in 1996. The grants included $2,000 to Akron United Methodist Church for its Village Green Project, $1,000 to Fulton Leadership Academy for its skill classes, $1,000 to Hope Hospice for Project Hope, and $1,000 to Kappa Delta Phi Sorority for its Shoes & Boots Project.

Glenda said that she never dreamed how it would grow throughout the years. “It has given so much to the community,” she said, “and I’ve been so happy to be a part of it.”

Thanks to the dedication of its founders, donors, staff, and volunteers, the FCCF has grown tremendously, holding $15.75 million in total assets. More importantly, it has awarded more than $14 million in grants and scholarships since 1993.