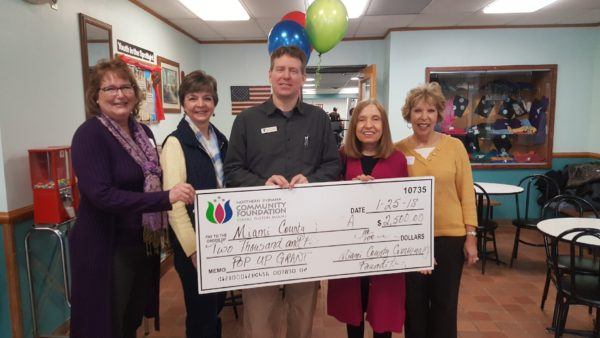 While the founders of the MCCF gained much support, they also faced doubt in the very beginning. Some community members believed that they couldn’t successfully raise the dollars required to start a community foundation. “Even we who persevered and believed that it could happen are amazed today to see what the Community Foundation has meant to Miami County throughout the past twenty-five years,” Susie said.

The Miami County Community Foundation (MCCF) was incorporated in 1993 and received its first gifts in early 1994. The first three donors were Paul Ravesloot, Donald Grate, and First Farmers National Bank & Trust. The MCCF wouldn’t be possible without these supporters and those who came after them.

The very first fund established with the MCCF was the Peru First Baptist Memorial Scholarship Fund. This scholarship was created in 1996 with a gift of more than $8,000. Also that year, Dukes Foundation gave a gift of $30,000 to the Community Foundation for the creation of the Dukes Memorial Hospital Fund.

To see the Community Foundation grow has been gratifying for Susie Perkins and others who were involved with the MCCF early on. However, what was even more rewarding was to see how it impacted Miami County. The MCCF’s first round of grants were awarded in 2000. The largest recipient that year was the Miami County YMCA, which received a grant of $3,800.

The Community Foundation has grown tremendously since its inception. It now holds nearly $10.8 million in assets and has awarded more than $6.2 million in grants and scholarships.

In celebration of its 25th anniversary, the MCCF will award pop-up grants to local non-profits throughout the year. The Community Foundation has decided that the first of these grants will be given to support the new YMCA project.

The new YMCA is part of the River View Landing community improvement project, which also includes more parking for a nearby city park and an extended biking and walking path that will connect to the Nickel Plate Trail.

The goal for the project is to benefit local residents and visitors who will enjoy the improvements, as well as the long-term benefit of enhancing the local economy. The project is currently in the fundraising stage, and the Community Foundation is happy to contribute.

As the MCCF continues to grow and to give, we’re happy to support the entire community as it, too, grows and thrives.