Posted at 02:40h in Starke County Story by tempadmin
Share 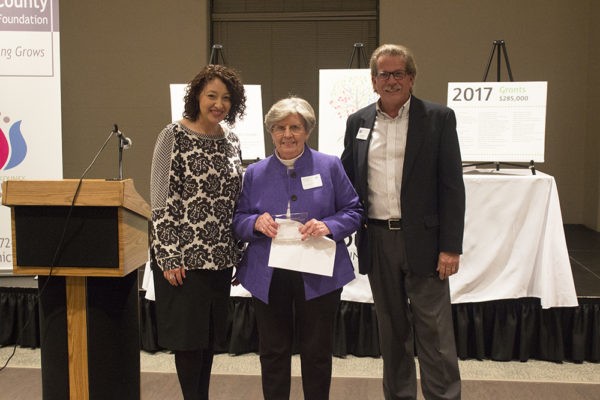 The Starke County Community Foundation (SCCF) held its annual Community Impact Reception on Thursday, October 25, 2018 at the Nancy J. Dembowski Community Center. The event, which was attended by nearly 80 individuals, gave the SCCF the opportunity to thank its donors and grantees and to celebrate the work they’ve accomplished in Starke County. Two awards were given during the reception, and a special announcement about a matching opportunity was made.

Sarah Origer, SCCF Director of Development, thanked donors for making it possible to give more than $400,000 in grants and scholarships so far this year. The SCCF has also reached the $12 million mark in assets. Origer also announced that Lilly Endowment announced a 2-for-1 dollar matching opportunity for gifts to community funds. The SCCF is additionally matching gifts to community funds $1-for-$1 on Giving Tuesday, November 27, during their annual open house, held at their office in North Judson.

During the celebration, Travis Clary, the Director of Starke County EMS, shared with the group the impact of the SCCF’s $14,350 grant to his organization for a Lucas device. According to Clary, this device, which performs CPR free of human error and allows EMTs to perform other live-saving tasks, has already saved several lives in Starke County and has brought Starke County’s survival rate percentage up to 70%, which is 60% higher than the national average.

Karen Zimmerman, Director of Little Lambs Preschool at Our Redeemer Lutheran Church, also presented information about the impact of the SCCF’s Preschool Scholarship Program. Zimmerman shared that families in need worry about having to sacrifice their children’s preschool education in order to make ends meet. The Preschool Scholarship Program brings comfort to these families and sets Starke County children on a track for success. Zimmerman said that she is thrilled when she tells parents that their child has been awarded a preschool scholarship, and parents have even been in tears at this news.

SCCF President Dave Altman said, “These two stories show that the Community Foundation is both saving lives and also shaping them.”

Jennifer Gappa was thanked during the program for her 6 years of service as SCCF President. Gappa then presented awards to two individuals. The first award went to Gene Ladd for his 12 of years of service as an SCCF board member. Gappa said, “When Gene and Nancy Ladd moved to Starke County in 2004, though we didn’t know it yet, it was a great day for the Starke County Community Foundation.” The SCCF has greatly benefited from Ladd’s financial expertise. Ladd has also served on the Northern Indiana Community Foundation board and the Finance Committee.

Finally, the 2018 James R. Hardesty Leadership in Philanthropy Award was given to Barbara McLaughlin. The award was established in order to honor James “Jim” Hardesty’s legacy of giving back to the community in which he lived. Jim lived in Hamlet, Indiana and genuinely loved Starke County. He stated his philosophy of giving simply and poignantly: “If you can’t do a lot, do what you can do.” Jim passed away on May 24, 2014 at 92 years of age. His contributions to the SCCF make up the largest gift to-date from a single donor in any of the three counties served by the Northern Indiana Community Foundation.

Barbara McLaughlin, the 2018 recipient of the award, is a founder of the SCCF. Dave Altman, her son-in-law, presented the award to McLaughlin, introducing her as an outstandingly charitable and caring person, listing the many organizations for which McLaughlin volunteers her time. McLaughlin’s family was in attendance to show their support for the matriarch of their family. McLaughlin addressed the group, sharing the many things she’s learned over the years since she helped to found the SCCF. The Community Foundation, she says, is the single thing that she is most proud of. The award came with a $500 gift to a fund of her choice, which McLaughlin chose to give to the McLaughlin-Leonard Family Community Fund.

The reception was catered by Christo’s and Connie’s Cakes and Confections.

For more information, contact SCCF Director of Development Sarah Origer at 574-772-3665 or starke@nicf.org.