“Always prepare for the future.”

07 Dec “Always prepare for the future.” 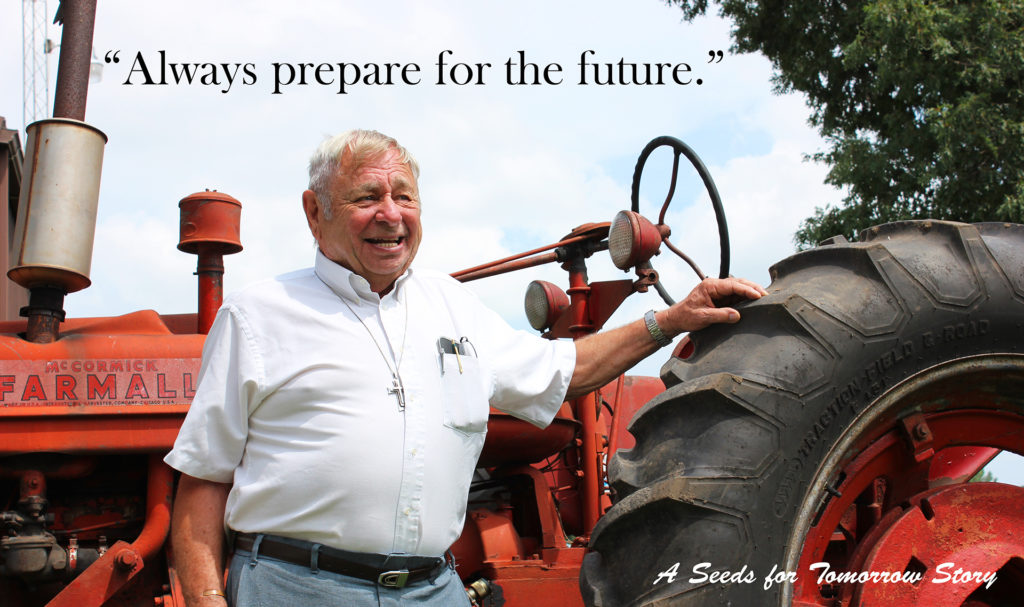 A Seeds for Tomorrow Story

Jerome “Jerry” Scherf is an entrepreneurial, forward-thinking man who is both business and community-minded.

He ultimately wants to continue to be smart with his assets and place them where he feels confident that they will be wisely invested, will continue to grow, and will make a difference in the community he loves long after he’s gone. Jerry found those qualities in the Community Foundation, which is why he chose to allocate a portion of his assets to the Community Foundation in his estate plan.

Upon his passing, his dollars will become endowed and will support Jerry’s choice of cause in Starke County—education. He feels that this is the best way to ensure that his dollars make the most lasting impact.

Jerry, a veteran, was named after Jerome K. Jerome, a writer his mother liked. When he was just six or seven years old, his family moved to California Township in Starke County, Indiana. There he remembers growing up on his family farm with his two brothers, where they had cows, pigs, chickens, and several hundred acres. They farmed soy beans, corn, and pickles, and they had an approximately half-acre garden. His other childhood memories include visiting neighbors, shopping in downtown Knox, and cruising in his brother’s Model A car.

Jerry’s superior business sense developed early. After graduating from high school, he began selling cars and insurance between working in several factories. His frugality and work ethic enabled him to grow financially, and he soon accumulated an abundance of rental properties. He has also owned several used car lots. Today, he still enjoys managing his rental properties and buying and selling cars. Although he’s retired, he continues to work several hours each day.

Jerry also went to auction school and attended IRS seminars to learn how to file taxes. He used this education to do taxes for the elderly or others in need on a volunteer basis. He continues to enjoy learning by taking computer classes. To him, continuing one’s education is invaluable.

In 1959, Jerry married his first wife, and the couple had two children, Catherine and Dwayne. He later met Donna Berg, with whom he spent more than thirty years until she passed away. Jerry and Donna loved life with one another, splitting their time between Starke County and Florida, where Jerry met her. He still travels to their Florida home.

Jerry is proud of his life’s work, his prudence with what he’s earned, and where he comes from. Although he’s had the ability to travel, he has always experienced a yearning for Starke County no matter where he goes.

“I’m so thankful for Starke County,” he said.

Jerry set up his bequest with the Community Foundation because he knows that his dollars will support the place he loves forever.

“Always prepare for the future,” he said. By investing in Starke County through the Community Foundation, he’s doing just that.

Will you join Seeds for Tomorrow?