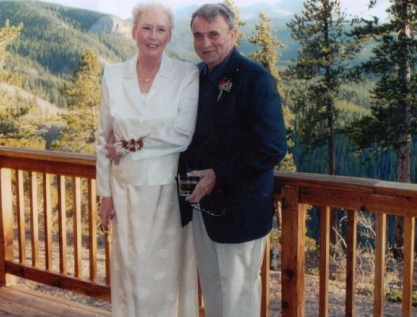 Gene and Nancy Ladd have been named the James Hardesty Leadership and Philanthropy Award for 2021. Award winners are considered to be outstanding philanthropists or an effective and worthwhile organization that makes an impact in the community. Gene served on both the Starke County and NICF boards for a number of years. Together, Gene and Nancy have put so much of their efforts into Starke County that we felt that their efforts would best be recognized by awarding them with the James Hardesty Leadership and Philanthropy Award.

The award was established in order to honor James “Jim” Hardesty’s legacy of giving back to the community in which he lived. Jim lived in Hamlet, Indiana and genuinely loved Starke County. He stated his philosophy of giving simply and poignantly: “If you can’t do a lot, do what you can.” Jim passed away on May 24, 2014 at 92 years of age. His contributions to the SCCF make up the largest gift to-date from a single donor in any of the three counties served by the Northern Indiana Community Foundation.

Gene and Nancy Ladd recently celebrated their 70th wedding anniversary. The love and hard work they have put into their marriage is something people should try to emulate. 70 years together is quite an achievement. Thank you, Gene and Nancy for everything. We wish you both nothing but the best.
Tweet
Share
Pin
Share